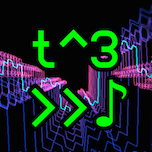 BitWiz comes bundled with lots of examples, and you can easily add your own codes to the built-in library. You can also share your codes by e-mail or twitter, or open them in another application.

Press a button to record your music in real-time, then export through iTunes file sharing or AudioShare.

Use the XY-pad or an external MIDI-control to tweak variables in the expression in real-time, so you can play BitWiz as a musical instrument! It can also include the microphone input for crazy distortion effects!

The entered code expression is used to calculate each audio frame. Don’t understand how to write valid code? Just swipe with two fingers and let BitWiz randomly generate the code for you!

Even though you can just play around with the bundled demo codes and change some numbers here and there, which is entertaining enough, you might be interested in knowing the deeper details to understand how and why a code sounds like it does.

The basics are that the code, which consists of one or more mathematical expressions, is evaluated once per audio frame. The audio frame rate can be any integer division of 44100Hz.

For each audio frame, the variable t counts up by one. So this variable holds the ‘‘audio frame counter’’ and is the main input for the mathematical expressions. Other inputs are c for channel counter (for stereo output), i for microphone input, and x and y for XY-pad input.

Multiple expressions can be separated by comma, and the resulting value of the last one is used. This result is wrapped to 8 bits and output as audio.

This gives that the most simple code:

A single t will produce a single value rising from 0 to 255 and then start over again at 0. The result will be a sawtooth wave at samplerate/256, which for the default samplerate of 7350Hz gives a bass note at 28.7109375 Hz. t & 128 will produce a square wave at the same frequency. Doubling the value of t like this:

means that it will wrap around twice as fast, and produce a sawtooth wave one octave up. In the same sense, halfing the value will make it twice as slow:

producing a sawtooth wave at half the frequency, one octave down.

Then, by manipulating the value of t and combining it through binary operators and integer constants, and using other variables, all kinds of complex stuff can happen, including recursive chaos!

Variables a to z can be set and used. Some of them are pre-defined (see help screen in the BitWiz app).

How do I record?

Long-press the play/stop button to start/stop recording. New recordings show up in the library (# button), where you can Audio Copy or open them in other apps. You can also access the recordings through iTunes file sharing if you want to use them on your computer.

How does stereo output work?

What’s the point with having multiple expressions if only the last one makes sound?

Because the earlier expressions can set variables which are then used in the last expression:

How to implement boolean stuff when there are no if/then statements?

You need to think functional instead of imperative programming.

Also, BitWiz has comparision operators, so if we instead want to test if y is greater than 123:

Can it do recursion?

Yes! All variables except the pre-defined ones are kept for the next evaluation of the code. Here’s an example that creates our own time counter instead of using the pre-defined t variable:

Actually, t is not set externally by BitWiz, only incremented by one from whatever value it currently has. So you could make it loop at a specific framecount by using t=t%12345

Can you implement my favorite feature?

Maybe yes, maybe no. Drop me an e-mail and I’ll try to get back with an answer!

Where does this method for audio synthesis come from?

I first saw it on viznut blog: Algorithmic symphonies from one line of code