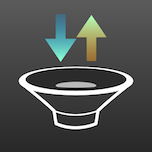 Your file manager for soundfiles and midifiles. Transfer between apps, to/from computer, email, dropbox, upload to soundcloud, and more.

Please see Frequently Asked Questions if you have any questions.

AudioShare is an audio document manager with powerful import and export abilities.

If you are using music-making apps on your device, this tool is a must-have!

Organize all your soundfiles and midifiles on your device. Create folders, rename and move files and folders around, put everything where you can find it.

Use it to transfer soundfiles between apps and between your device and computer. For example, take a soundfile from your dropbox and share it on SoundCloud. Or audiocopy sounds from your favorite music-making app and import into the AudioShare library for later sharing or copying into other apps. Since version 2.7 you can also use the built-in WiFi drive to transfer files to/from any web browser on your local network.

Some apps has a dedicated Export to AudioShare button for super-smooth workflow.

You can also record directly in the app from hardware input or other apps through Inter-App Audio or Audiobus, in 16, 24 or 32 bits. preview and play soundfiles with waveform display, normalize, trim, apply fades, or convert soundfiles.

Since version 2.6, AudioShare features a built-in Inter-App Audio host with 4 slots. The input slot takes an IAA generator/instrument app, or the hardware input, or Audiobus. The remaining three slots can hold IAA effect apps to process the audio. Additionally, the first slot can also hold the internal File Player for processing of audio files through IAA effect apps.

Full Dropbox integration, transfer multiple files and folders to and from your Dropbox.

AudioCopy and AudioPaste are trademarks and software of Sonoma Wire Works.

However there’s a simple workaround: download the official SoundCloud app, and upload from there. If you enable “AudioShare Files” in the iOS Files app, you will be able to pick files directly from AudioShare when you upload in the SoundCloud app.

Future versions of AudioShare will have the built-in SoundCloud support removed, since there is now a better and more future proof solution.

Where did the built-in web browser go?

When submitting the 2.7.2 update, the app was rejected because of the built-in web browser. It was not appropriate to include functionality that allows users to download media content. The browser had to be removed to get the app accepted. I’m very sorry for this.

However, you can still download ZIP files with sample packs, synth presets, etc through Safari on your device, and choose “Open in..” AudioShare. And there are online services that can create ZIP archives if your original file is in another format.

What is iTunes File Sharing?

File Sharing is the way to transfer files between an app and your computer: http://support.apple.com/kb/ht4094

It’s used not only by iTunes itself, but also more versatile tools like iFunBox.

Since AudioShare 2.7, we recommend that you only use the iTunes File Sharing folder as a landing place for when you need to use it for transferring files. Files in this folder are not accessible by the document picker extension on iOS8. Use the WiFi drive for wireless transfer of files to/from a computer!

Can AudioShare export songs to the Music Library on the device?

Unfortunately, no. iOS only allows an app to export photos and videos, not music. You’ll need to go through your computer to do this, using the WiFi drive or iTunes File Sharing (see above). Note that this is a limitation in iOS itself, I would love to add this feature if only it was possible.

Can AudioShare convert to mp3?

iOS doesn’t provide an mp3 encoder. The mp3 format is covered with patents and providing my own mp3 encoding could mean patent infringement, something I can’t risk. AudioShare doesn’t generate enough money to pay the expensive mp3 license. http://www.mp3-tech.org/patents.html

How do I rename files?

Long-press on the filename in the library and choose “Rename”.

Something is not working, or behaving strange!

As with all apps, sometimes it can help just restarting it, as described here

Is Bluetooth audio not working?

Since AudioShare is both a recording and playback app, it will only work with two-way bluetooth devices. That is, devices with both microphone and speaker. Also, such devices will be used in “handsfree” mode, giving telephone quality instead of full quality. This is because of limitations in iOS, and unfortunately nothing I can change.

UPDATE: Apple has adressed this issue with iOS 10, and I will enable hi-fi bluetooth support in the next AudioShare update.

How do I move files and folders?

For moving a single item, long-press the filename in the library and choose “Move”. For multiple items, tap “Edit” and select the items, then press the green move button (An arrow pointing down into a box).

Can AudioShare record the sound of other apps?

Yes, AudioShare supports Audiobus, meaning that AudioShare will be able to record sound from any other Audiobus-compatible app! Since version 2.6, AudioShare also supports Inter-App Audio on iOS7 and later!

If you get Could not create IAA node, error -1 when trying to connect an app inside AudioShare, it means that one or more IAA apps has become “stuck” in the background. It is not a bug in the IAA node or AudioShare, but simply a glitch in how IAA currently works. Simply take the following steps to fix the issue.

How do I transfer multiple folders and files from my computer?

The interface for file sharing in iTunes does not allow you to enter subfolders or transfer folders of files. Instead, you can use iFunBox (free) to transfer multiple folders and files from your desktop computer to AudioShare. http://www.i-funbox.com/

You can also use the WiFi drive and select multiple files for upload in the web browser.

AudioShare SDK will let you export/import audio or midi from your own app into the AudioShare app or the other way around, with just a single line of code. Take a look at the SDK and add that “Export to AudioShare” or “Import from AudioShare” button in your own app!

It’s similar to AudioCopy, but:

The AudioShare SDK falls back to General Pasteboard if AudioShare is not installed, so it’s a handy way to add copy/paste functionality. It even appends the correct filename extension for audio files pasted from the pasteboard. Users with AudioShare installed get the additional benefits of AudioShare.

Important note for iOS 9 and later

Since iOS 9, apps must whitelist URL schemes to allow querying them with canOpenURL, which this SDK does.

For your app to work with AudioShare SDK on iOS 9, you must add the following entry to your Info.plist:

Some apps that have implemented direct AudioShare support includes:

Do you know of an app that has implemented AudioShare SDK but is not listed above? Let me know and I’ll add it!

Note that implementing the AudioShare SDK is not needed for an app to be able to communicate with AudioShare, as long as the app implements “Open In”, can open audio file URLs, or implements AudioCopy/Paste. But please contact the developer of your favorite apps and ask them to add AudioShare support, since it makes it even easier for the user. It’s only a few lines of code!